I have heard that making the Trade Federation characters as Japanese was racist- particularly when Jedi Qui-Gon Jinn was extremely dismissive of them, saying “These Federation types are cowards. The negotiations will be short.”
But maybe rather than calling the screenwriter a racist, it is showing the viewer how racist and extremely arrogant the current crop of Jedi are. You go in the movie assuming, with a nudge from the opening crawl, that the Jedi are awesome- but maybe there is nuance in there. Gray areas you didn’t think of before.

Jar Jar Binks is the most annoying character in the Star Wars universe. It goes without saying, but I’m saying it to lead into a favorite fan theory that really he was meant to be a dark side Sith Lord- above Darth Sidius! If it would have played out in Episodes II and III that Jar Jar was either working for or even the master of Sidius, then THAT would have been worth wading through his annoyances. But since his annoying behavior doesn’t lead to any payoff, it has no reason to be. It’s just annoying, and George Lucas is a coward for removing Jar Jar’s reveal as a Zui Quan (drunken boxing) style Sith master from the storyline. Jar Jar is either the true Count Dooku or even the Supreme Leader Snoke!

So when they enter the underwater Gunga City, they just pass through a force field separating water vs air. So…what happens when a fish swims through? This would probably happen every minute. Do they have like an automatic squeegee or something to sweep them back into the water?

Wow, the Boss was really trying to kill them by making them go through the planet core!
It sounds like Sith Jar Jar was trying to kill Boss Nass. It didn’t work. He got off as just clumsy and banished instead of evil and executed.

Why does Lucas do the small fish, bigger fish thing twice in a row?

These hologram teleconferences always have the audio breaking up to show the large distance involved in transmissions across the galaxy (I guess?), but my experience is the high bandwidth of a hologram video would probably freeze or break up before the audio would.

Are we ever going to see the Angels from the moons of Lego?

So slaves have their own, off-site apartment. Just like me!

What revenge against the Jedi is Darth Maul talking about? What did the Jedi do to the Sith?

Shmi Skywalker has a Swedish accent. Why doesn’t her son Anakin have the same accent? (I know. That’s nit-picky.)

So slaves have their own podracer. Just like I have a car!

What were all those midi-chlorians doing in one of Shmi’s fallopian tubes?

No Jedi has a midi-chlorian count as high as little Ani, but then rather than assume “it’s A Force Miracle!” I would guess there is some technology involved since midi-chlorians are a physical life force measurable in a blood test. The question would be did a Sith Lord do this with a dastardly plan or did a Jedi with all of our best interests at heart and know-better-than-us-what-is-good-for-us do this? They would have made her unconscious (or cause to forget?), kidnapped her, knocked her up in a lab, and set her loose on Tatooine (so-to-speak, relatively- for a slave. Not actually set loose).
Which high level Sith or Jedi keeps tabs on the goings-on in Tatooine? Which one has connections with Gardulla the Hutt and could grab one of her slaves for a lab project? (BTW my money is on Darth Plagueis, who had power over life and death, and Gardulla is mentioned in the book.)

God, this podrace is sooooo long.

So Qui-Gon Jinn can jump up into a moving ship, but Darth Maul can’t?

Having an entire planet turn into one big city is MESSED UP! I’d guess a civilization with such a thing would be messed up also.

Jar Jar telling Ani that the Queen is “pitty hot” is pretty gross. But he is Sith, so…

I don’t understand why Queen Amidala believes Senator Palpatine’s view of the scenario. Why not at least get a second opinion? I’m sure she could even take a meeting with Chancellor Valorum himself since he was already magnanimous enough to send two Jedi to help the Naboo and meet her at her ship when she arrived at Coruscant.

So during this assembly, we can pause for a vote of no confidence in the supreme chancellor, but not introduce evidence of an invasion?

Yoda is a hard-ass.

So if Obi-Wan has to face the trials before becoming a Jedi knight, what did Luke do for this since the Jedi Council was no more?

Huh, they took the photo of Microsoft Windows XP desktop background just before the battle of Naboo started.

The Gungans have HUGE feathers on the back of the mount for the animals they ride. I wonder what ginormous bird they killed to put three feathers on each saddle.

Wait, at the beginning of the movie, Obi-Wan and Qui-Gon did some kind of lightning-fast, Force run down a hallway to escape the droidikas, but now Obi-Wan can’t run fast enough to reach Qui-Gon fighting Darth Maul when the forcefield-doors-hallway separated them?

Why is Darth Maul flat footed with Obi-Wan jumps right over him?

Palpatine knew Anikan would have a “career he would watch with great interest.” That tells me he already knew about him, so probably a Sith engineered Anikan.

The actor who plays little Ani is remarkably believable in this role. Good job. What ever happened to his career? (Yes, I could look it up on IMDB before writing this down, but I’m just sayin’ off the top of my head I have no idea.) 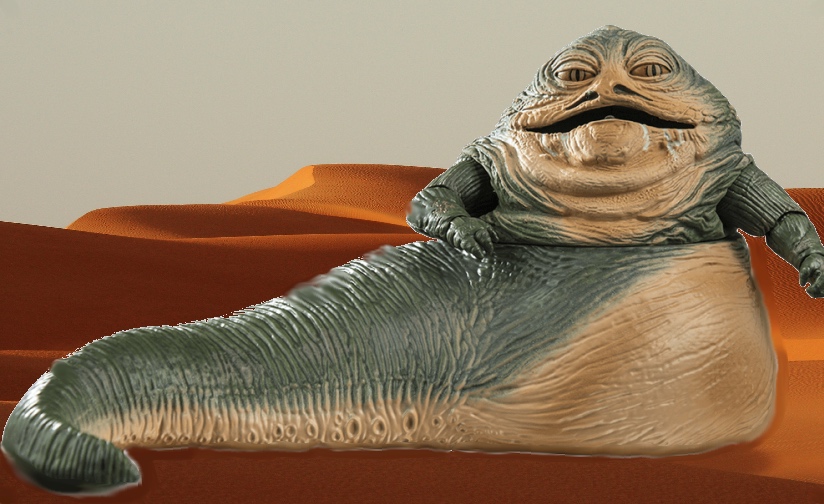 I watched Return of the Jedi again for the first time in about 20 years. I have some thoughts and questions: